What Are the Symptoms of Parkinson’s Disease?

Millions of people around the world live with Parkinson’s disease, a condition that affects the nervous system. Symptoms of Parkinson’s disease typically affect movement and motor skills, making it difficult for patients to complete daily activities without assistance.

The Progression of Parkinson’s Disease

Parkinson’s disease symptoms start gradually and become more intense over time. In many cases, patients first experience muscle stiffness and a slight tremor or shaking in one hand. It is common for movement symptoms to affect one side of the body first before gradually impacting both sides.

As the disease progresses, many Parkinson’s disease patients experience dementia, delusions, and hallucinations. Mood changes and mental health conditions like depression and anxiety are also common.

During later-stage Parkinson’s disease, many patients are unable to complete daily tasks alone or move without assistive devices. Some patients are often bedridden and require around-the-clock care. 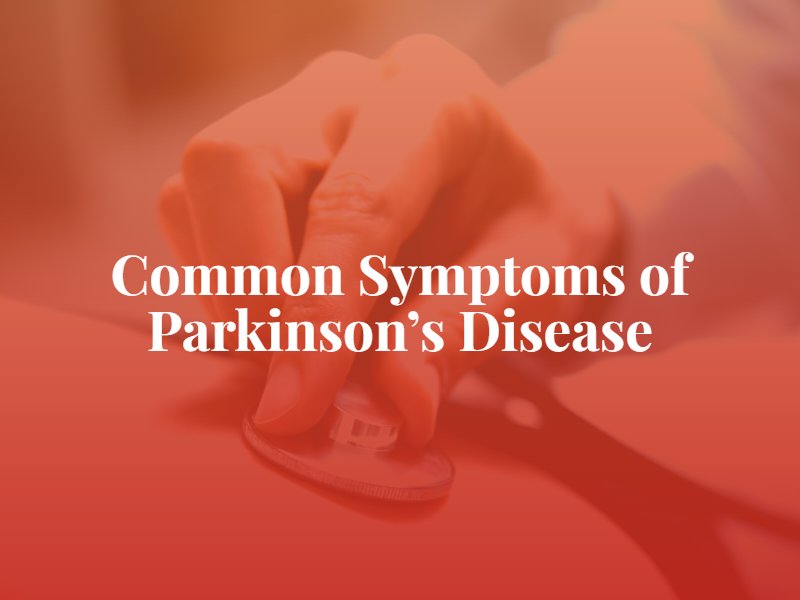 While any condition can vary from patient to patient, people with Parkinson’s disease often experience a few telltale symptoms. The following are some of the most common signs of this disorder.

For patients, tremors usually begin in a limb, such as a hand or fingers. The affected body part may tremble even when at rest.

Rigid muscles can occur in any part of the body for people with Parkinson’s disease. Walking and moving can become painful. In many cases, a patient’s range of motion is limited due to muscle stiffness.

During the later stages of Parkinson’s disease, stiff muscles can make it difficult for patients to move without mobility devices. Rigidity in the legs can cause a patient to become bedridden.

It is very common for Parkinson’s disease to noticeably slow movement. Due to muscle rigidity and shaking, it may take longer to complete daily tasks. These activities may feel much more difficult to handle without assistance. For example, a patient may need to take shorter steps when he or she walks. It can take longer to get from place to place. It can become more difficult to button or zip clothes or tie shoes due to tremors and shaking.

Many Parkinson’s disease patients lose the ability to perform automatic, unconscious movements. For example, a person may have a decreased ability to blink on-demand or smile. He or she may be unable to swing his or her arms while walking.

Loss of coordination is common among Parkinson’s disease patients. They may experience difficulties with balance and become more prone to falls and accidents.

Posture changes are also common. A patient may start stooping and be unable to stand up straight. While walking, he or she may lean forward and shuffle.

Many Parkinson’s disease patients experience unexplained changes in writing. For example, a patient may notice that his or her handwriting becomes smaller or more cramped. It may become very difficult to write.

Speech changes are also common. A patient may slur his or her words, speak softly, or become more monotone in his or her voice rather than having the usual inflections that are common in speech. Speaking too quickly is also common, as is hesitating before talking.

There is no cure for Parkinson’s disease. However, it is possible to manage and live with symptoms with medications, lifestyle changes, assistive devices, and caregivers. There are many treatment options available for patients with Parkinson’s disease, such as the following.

Living with Parkinson’s disease can be challenging. If you or a loved one are diagnosed with this condition, you may experience financial hardship and emotional trauma on top of the physical symptoms. In certain situations, you may be eligible to recover compensation to pay for your medical care, lost wages, long-term costs, and more.

If you are diagnosed with Parkinson’s disease and believe that Paraquat is responsible, you could file a lawsuit and recover compensation to pay for your treatment. In these situations, it is important to talk to an attorney with experience handling these claims to discuss your eligibility.

As soon as possible following your diagnosis, contact a Paraquat lawsuit lawyer and take your first steps toward filing a claim.