In April 2020, the U.S Food and Drug Administration (FDA) issued a recall for the heartburn medication Zantac, after carcinogenic impurities were found in samples of the prescription drug. The recall, along with a surge in reports of serious complications caused by the drug, has led to well over 100 lawsuits against drug manufacturers – Sanofi S.A. in particular. These lawsuits could soon number in the thousands.

What Is Zantac and What Is it Used for?

Zantac is a prescription drug that treats and prevents heartburn – a condition that affects 15 million Americans daily and 60 million Americans at least once a month. Zantac’s generic name is ranitidine and has also been available over the counter.

Ranitidine is a part of a group of drugs called histamine-2 blockers that decrease the amount of acid your stomach makes. It is most commonly used to relieve heartburn – a burning pain or sensation in the chest that occurs when acid is backed up into the esophagus. If heartburn persists, it could be a symptom of a more serious and chronic condition of acid reflux: Gastroesophageal reflux disease (GERD) or an ulcer in the stomach or intestines. Ranitidine treats both conditions.

Why Was Zantac Recalled?

As early as 2018, European and American regulators began finding low levels of N-nitrosodimethylamine (NDMA) in some samples of ranitidine. NDMA is classified as a probable carcinogen or a chemical that can cause cancer. Low levels of NDMA can be found in food and water, and have not raised concern. However, there is a possibility that “sustained higher levels of exposure may increase risk of cancer in humans,” according to the FDA news release.

In June 2019, the online pharmacy company Valisure initially notified the FDA that they had found low levels of NDMA in some of the batches of ranitidine. After a safety review, the FDA released a statement alerting the public of the findings of NDMA in September 2019 – still limited at this point.

Shortly after, the pharmaceutical company Sandoz issued a voluntary recall for ranitidine and major pharmacy chains including Walgreens, CVS, and Rite Aid stopped selling Zantac and its generic versions.

On April 1, 2020, the FDA recalled all products of ranitidine from the market, both prescription (brand name Zantac) as well as over-the-counter and generic versions. New FDA findings were more definite, and they confirmed that NDMA levels in ranitidine increased notably when stored in high temperatures, but also, under normal storage conditions. This meant that NDMA levels increased in temperatures the drug was stored in during distribution or consumer use. In addition, the findings determined that the level of NDMA level depends on when the ranitidine was manufactured – the older the ranitidine, the higher the NDMA levels.

The pharmaceutical company Glaxo Holdings Ltd, now a part of GlaxoSmithKline PLC, brought Zantac to the market in 1983, after receiving approval from the FDA. In just five years, Zantac gained popularity and became a world best-seller – exceeding $1 billion in annual sales for the first time. From 1987 to 1988, Glaxo’s annual sales rose 37 percent, reaching $1.3 billion and naming Glaxo the world’s second-largest pharmaceutical company.

In 2004, the pharmaceutical company, Pfizer received approval from the FDA to sell over-the-counter versions of Zantac in the U.S. From there, Pfizer licensed the drug to other companies, including Johnson & Johnson and Boehringer Ingelheim Pharmaceuticals. Sanofi S.A., the most current seller of Zantac, purchased it in 2017. In 2018, Sanofi reported it made roughly 124 million in U.S. currency.

According to the FDA Adverse Event Reporting System (FAERS), they received a total of 73,240 cases with a negative effect of Zantac since 1983.* This includes:

*This number combines cases where the patient had multiple adverse reactions. For example, if a patient reported three different reactions, we counted them just once

In 2018, 18,739,686 people in the United States were prescribed Zantac. The same year, 1,094 cases involving Zantac were reported to the FDA. There were 316 cases that reported that the drug was ineffective. At this time, only two cancer cases were identified.

From 2012 to 2016, prescription drug advertising expenses increased by 62 percent – specifically for direct-to-consumer advertising, or TV ads. 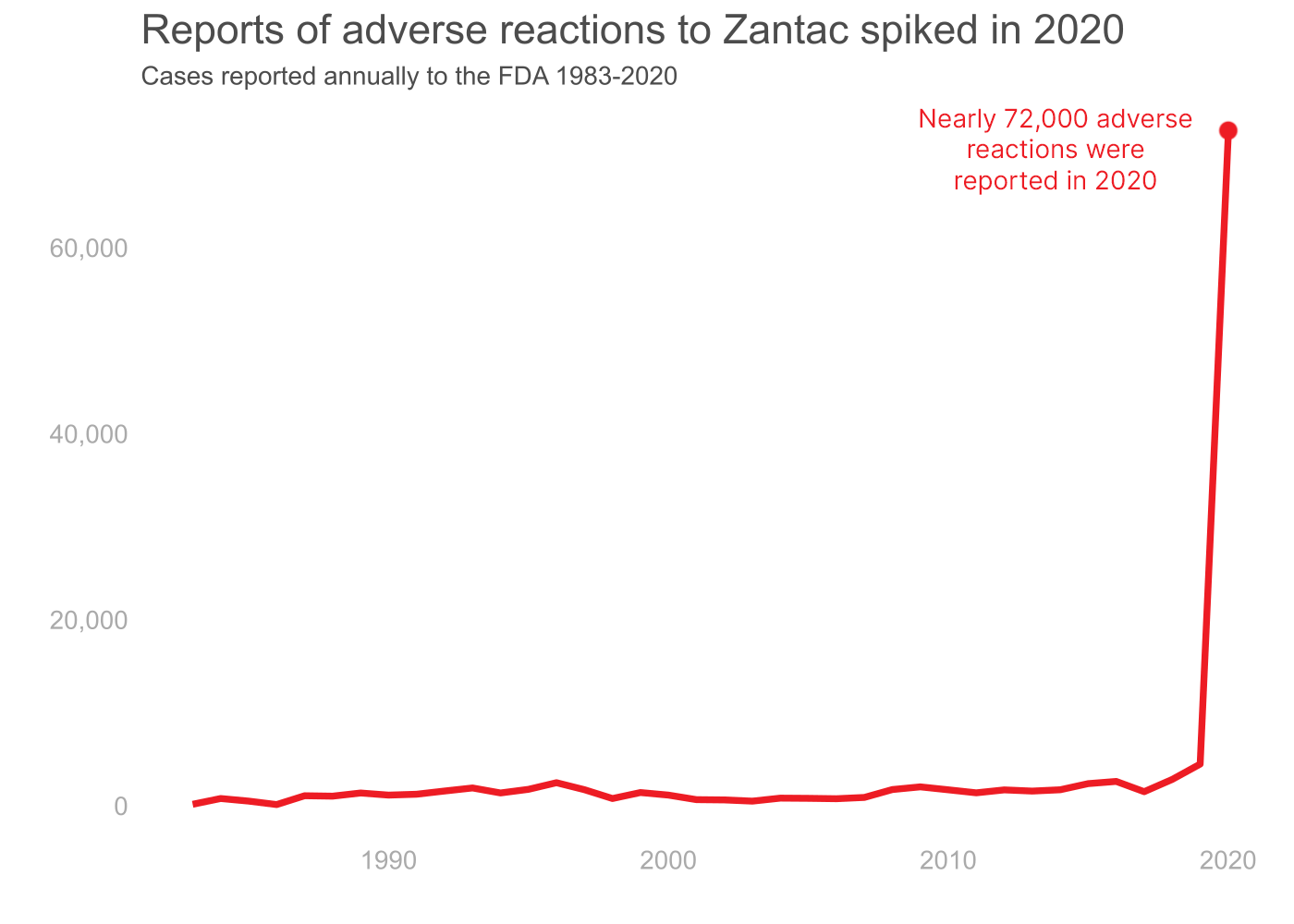 Zantac Cases and Link to Cancer 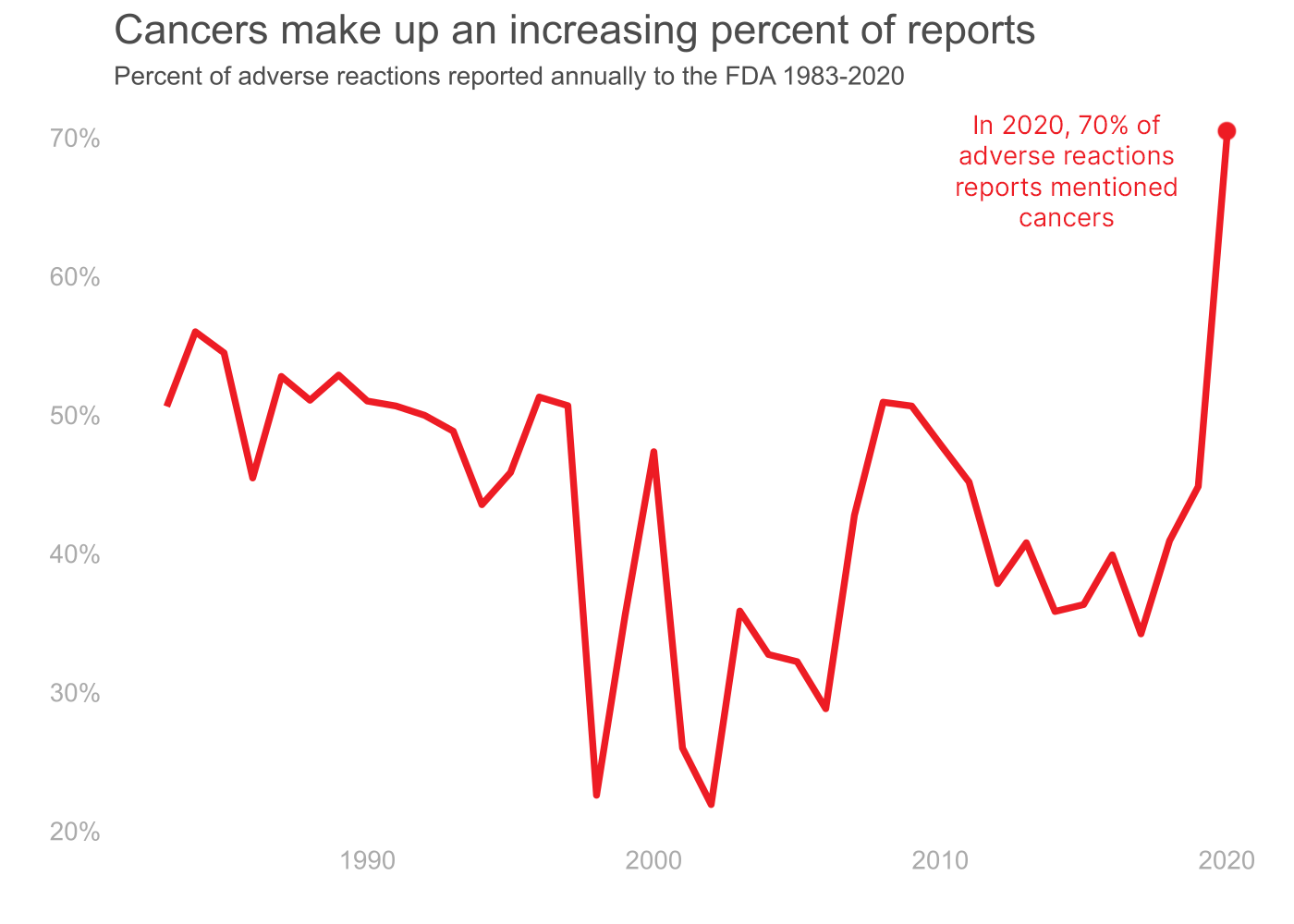 The most common cancer listed as a reaction was colorectal cancer – or colon cancer. Patients reported 10,698 colon cancer cases after taking Zantac. Kidney cancer and pancreatic cancer were also listed in the most common reactions tied to Zantac and had increased rates of new cases overall. The rate of new cases for kidney and renal pelvis cancer showed a steady increase from 1992 to 2008 and remained high from 2008 to 2018. The rate of new cases for pancreatic cancer steadily increased from 2004 to 2018.

The top 15 cancers listed as reactions in total Zantac cases are: 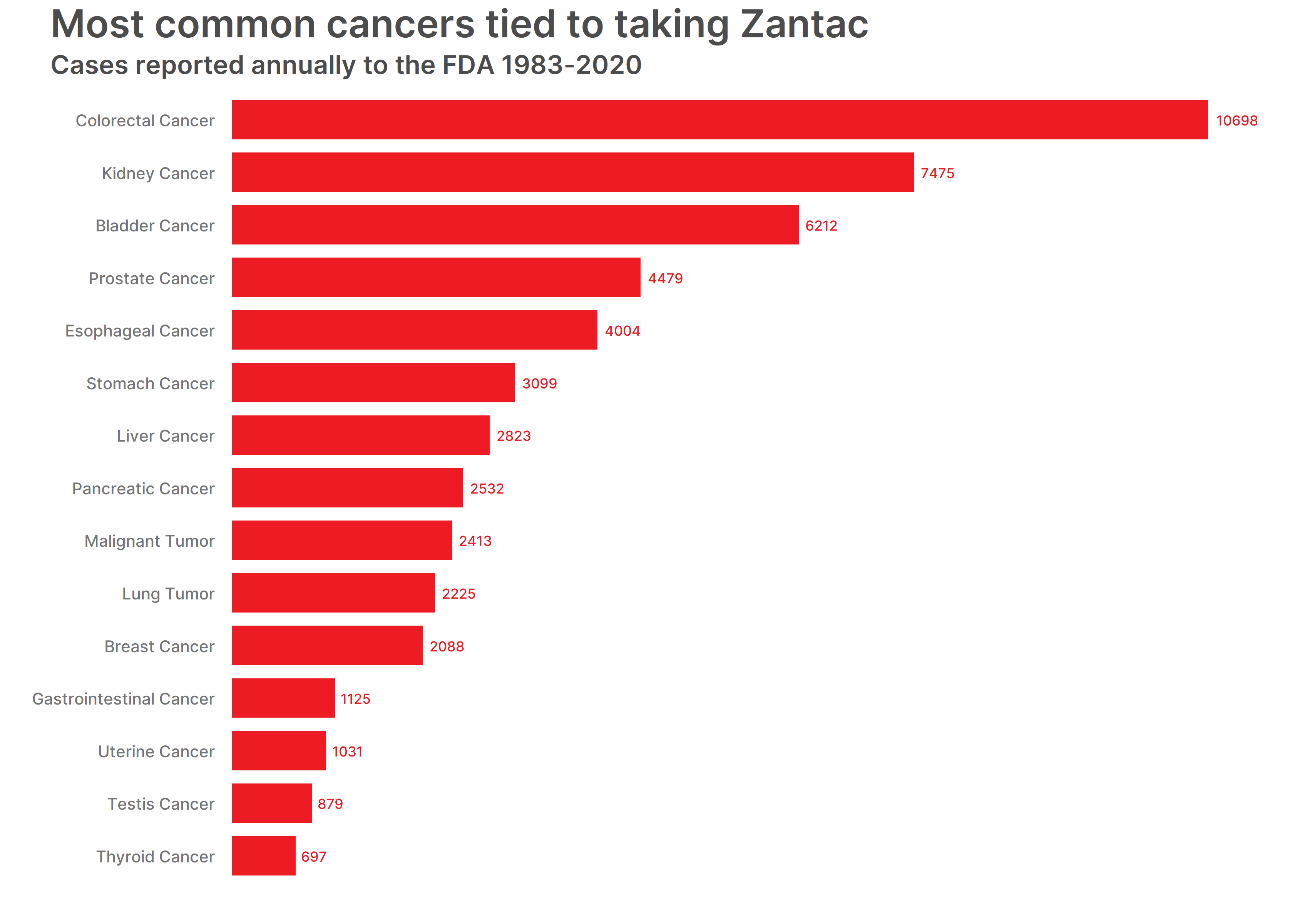 We also compared Zantac cases that led to death and the reactions listed. In 87 percent of the death cases, cancer was the leading cause. Pancreatic cancer resulted in the most Zantac death cases, followed by liver cancer and esophageal cancer.

The top 15 cancers listed in Zantac death cases are: 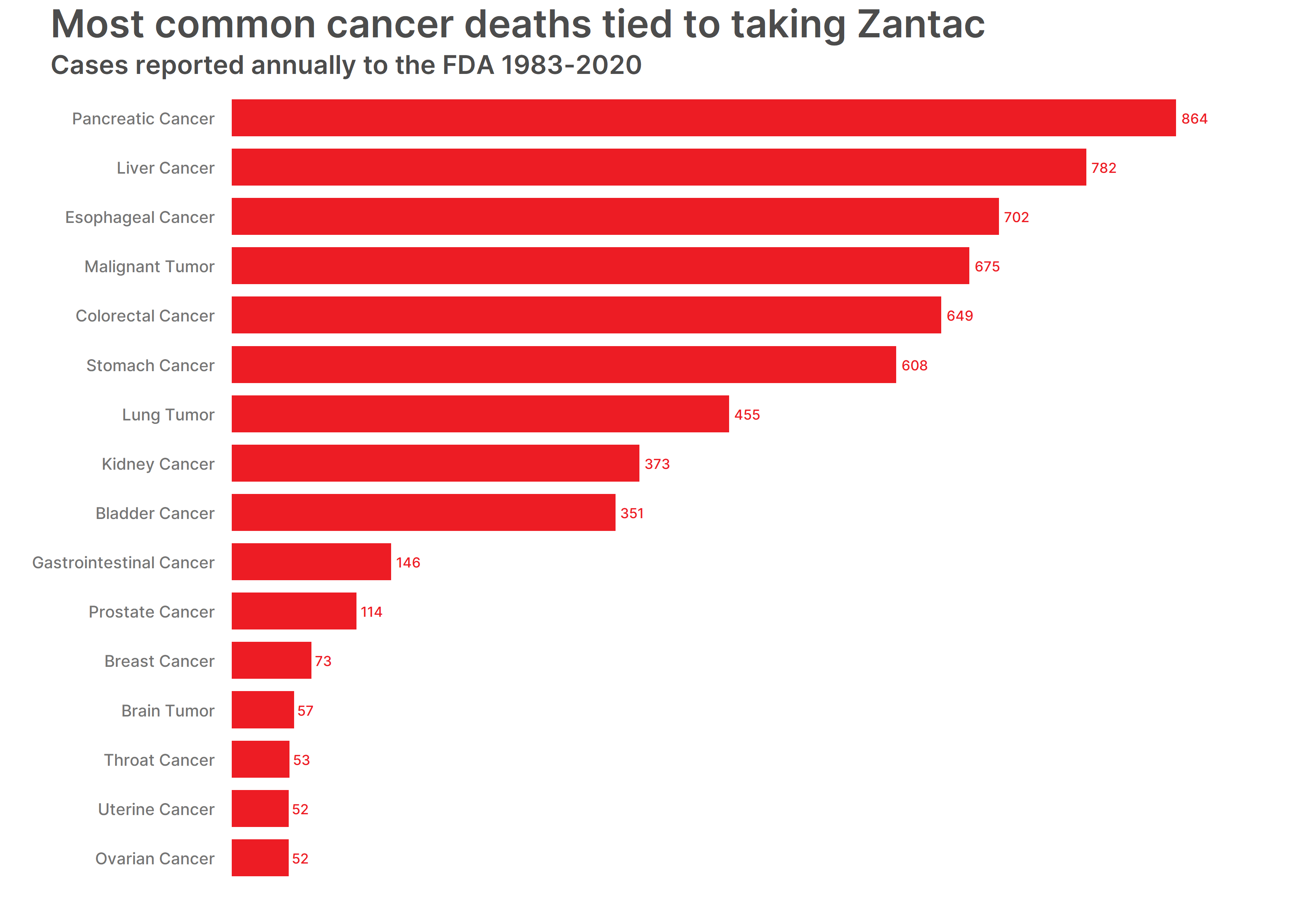 Deadliest Cancers Linked to Zantac Use

While we knew that cancer was the leading cause of death in Zantac death cases, we wanted to find out which cancer type was the deadliest. It makes sense that pancreatic cancer – the cancer type tied to most Zantac deaths – was the deadliest cancer. Pancreatic cancer resulted in 34 percent of patients’ deaths. Other deadly cancers included a malignant tumor, liver cancer, and brain tumor. They caused the deaths of nearly 30 percent of patients. 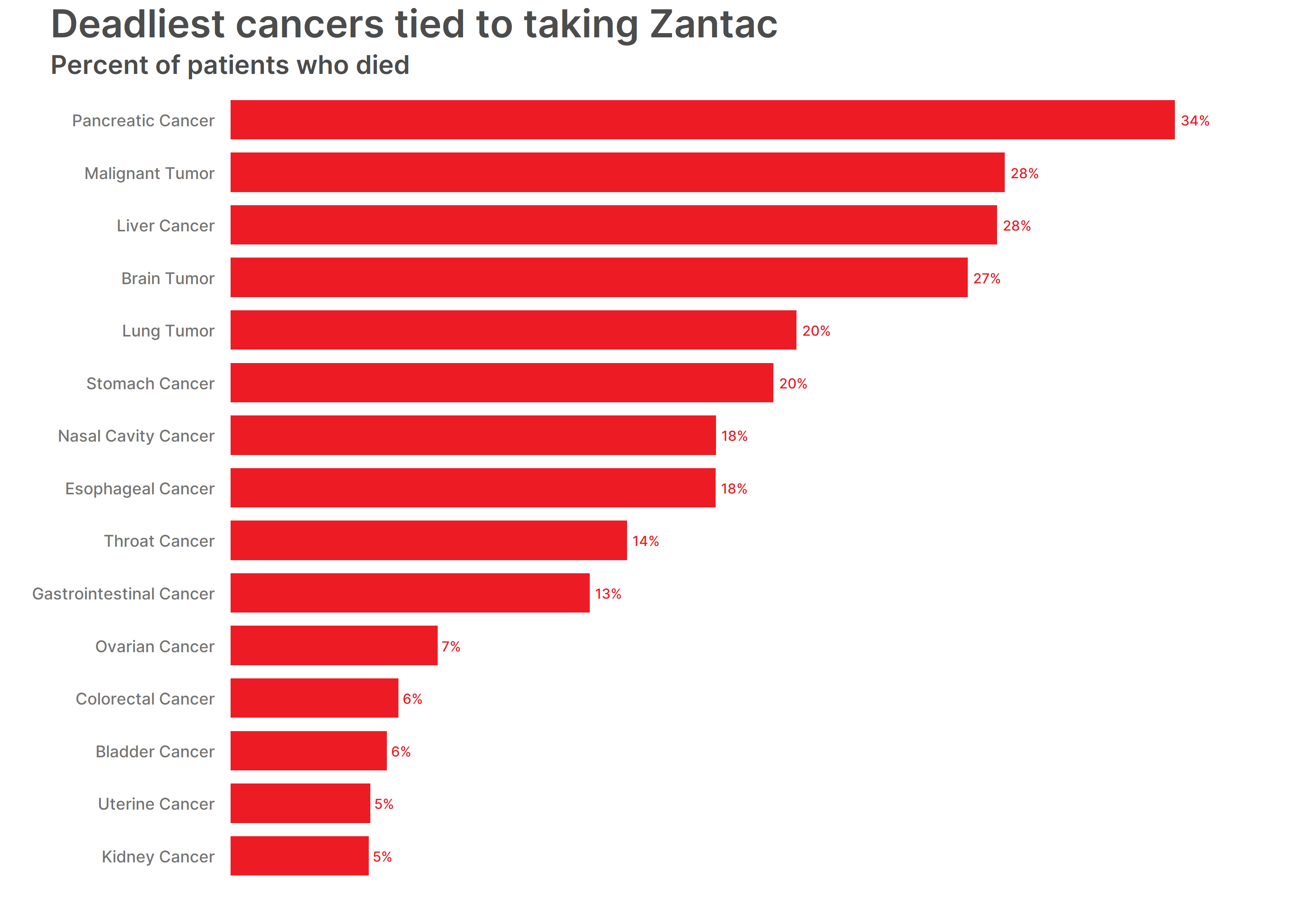 The majority of cases did not specify gender or age. While anyone can experience symptoms of heartburn or acid indigestion, people who are overweight, pregnant, or elderly are more prone.

Out of the total cases of 73,240, the breakdown of cases by gender:

We wondered how long it took patients to report their reactions after taking Zantac and found that the more serious the reaction, the longer it took to report. In general, there was a delay in reporting Zantac-related cancers – as cancer can take years to develop. We found that patients took around four years to report cancer, around two years to report anxiety and much less time to report reactions like itching, which were more easily discernible. Patients were also quick to report if the medication wasn’t working at all.

Why This Information Matters

Approximately 15 million people were prescribed Zantac annually before the drug’s link to cancer was discovered. We hope that this data provides you with the information you need. If you or a loved one has suffered a serious health complication as a result of Zanac, you are not alone. The attorneys at Shapiro Legal Group can help you seek justice and financial compensation for your losses.

Methodology and Fair Use

The data used in our analysis comes from the FDA Adverse Event Reporting System (FAERS) from 1983 to 2020. It includes a search of the following products:

We combined cases where the patient had multiple adverse reactions; therefore, if a patient had reported three different reactions, we counted them once. However, certain factors – including how long the drug was used by a patient – are unknown. FAERS data consists of voluntary reporting. Healthcare professionals, patients, manufacturers, and other consumers can submit reports directly to FAERS. If a consumer or healthcare professional sends a report to the manufacturer, the manufacturer is required to send the report to the FDA.

If you would like to report or republish any of the data or images included in this analysis, please provide credit to Shapiro Legal Group by linking to this page.