Members of the U.S. military risk their lives every day. However, these dangers extend far beyond foreign or domestic enemies. Many military members and their families have been exposed to toxic substances during their service, from dangerous burn pit fumes to Agent Orange and contaminated water.

These toxins can lead to serious health conditions like cancer, birth defects, and more. To support military members, the U.S. federal government recently signed into law the Honoring our Promise to Address Comprehensive Toxics (PACT) Act of 2022. This landmark piece of legislation intends to improve access to healthcare for veterans suffering from the effects of toxic exposure.

What Led to the Creation of the PACT Act?
What Does the Honoring Our PACT Act Do?
The PACT Act’s History
What Conditions Are Now Presumptive under the PACT Act?
Steps to Follow if You Are Now Eligible for Compensation 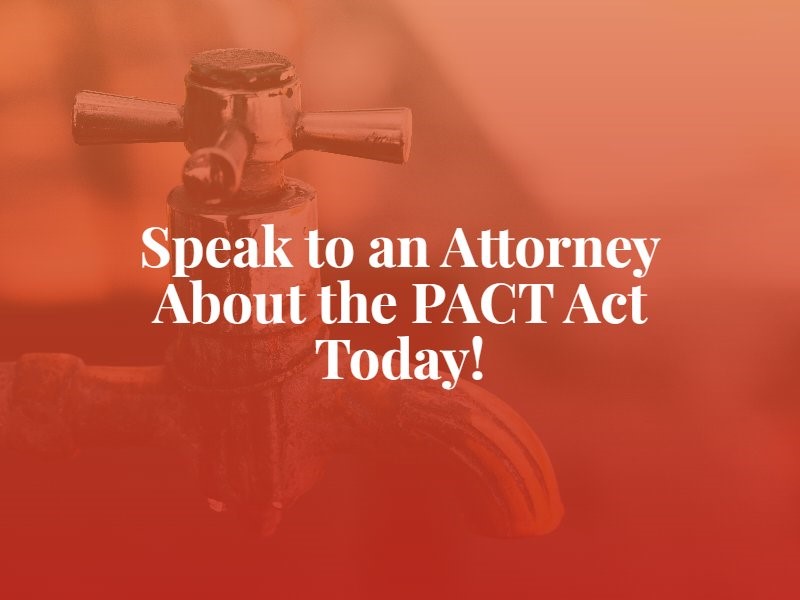 What Led to the Creation of the Honoring Our PACT Act?

Multiple factors spurred the creation of the Honoring Our PACT Act. For decades, military veterans have suffered from serious health problems due to exposure to environmental hazards and toxins. At the same time, their claims for healthcare were repeatedly denied by the Department of Veterans Affairs (VA), resulting in a significant hardship.

During the Gulf War, the Kosovo War, the War in Afghanistan, and the Iraq War, burn pits were used as waste disposal methods near military bases. These pits released toxic fumes into the air, which nearby soldiers inhaled. As a result, many soldiers have developed serious illnesses like cancer. The VA allegedly denied nearly 80% of claims related to burn pits filed between 2007 and 2020.

At Camp Lejeune, a Marine Corps base in North Carolina, the water supply was contaminated by dangerous chemicals between 1957 and 1987. Military members and their families have suffered various health problems as a result, including cancer, birth defects, and miscarriages.

What Does the Honoring Our PACT Act Do?

The Honoring Our PACT Act expands VA benefits and healthcare for military veterans exposed to toxic substances. The law expands the number of health conditions that are presumed to have been caused by these materials, helping veterans and their families access the treatment that they need.

To receive disability benefits from the VA, you must prove that your disability is related to your military service. For some conditions, the VA automatically assumes that the illness was caused by your service, and no proof is necessary to recover benefits. These are known as presumptive conditions.

With the Honoring Our PACT Act, the following changes have been made:

Additionally, the PACT Act provides a new federal cause of action for people who were exposed to contaminated water at Camp Lejeune. Before the law, victims were only able to obtain VA disability benefits for the harm that they suffered. Now, those exposed to the toxic water have the right to recover monetary relief under Section 804.

The History of the Honoring Our PACT Act

The Honoring Our PACT Act was first introduced in the U.S. House of Representatives on June 17th, 2021, sponsored by California Representative Mark Takano. After the House passed the bill with a 256-174 vote in March 2022, it was initially passed by the Senate in June 2022 with an 84-14 vote.

However, the bill needed to be revised due to a previously unnoticed constitutional issue. When the revised version reached the Senate again, it failed 55-42 after a cloture vote in July 2022. The failure occurred after 25 Republican Senators flipped their votes, citing concerns with a funding provision.

In response to the failed vote, dozens of military veterans protested outside of the U.S. Capitol for five days, and multiple advocacy groups called on Congress to pass the Act. Amid pressure from these groups, the Honoring Our PACT Act passed the Senate with a vote of 86-11 on August 2, 2022. There was no change to the bill’s text between these votes. Then, President Joe Biden signed the Act into law on August 10th, 2022.

What Conditions Are Now Presumptive under the PACT Act?

Before the PACT Act, it was very difficult for victims of burn pit exposure and other toxins to receive critical healthcare. With the passage of the Honoring Our PACT Act, several illnesses and types of cancer are now presumptive and therefore eligible for VA benefits. If you were diagnosed with an illness that was caused by toxic exposure during your military service, you can now apply for VA benefits and get the care that you need.

The following types of cancers are now presumptive:

The following illnesses are also presumptive and eligible for benefits:

If you believe that you qualify for benefits under the PACT Act, you can file a disability claim with the VA. You can apply online to receive your benefits. Before filing, make sure to gather your medical records, evidence of your military service, and supporting statements from family members, friends, coworkers, and other people who can validate the nature of your medical condition. These pieces of evidence will help streamline your claim.

You may also want to consult with an attorney who can guide you through the application process and protect your rights in the event that the VA denies your claim. A Camp Lejeune water contamination lawyer can assess your situation, determine whether you qualify for PACT Act benefits, and provide valuable support each step of the way.

As soon as you realize that you may be eligible for PACT Act compensation, contact an attorney as soon as possible. Your lawyer will carefully assess your situation and help you take your first steps toward recovering fair compensation.